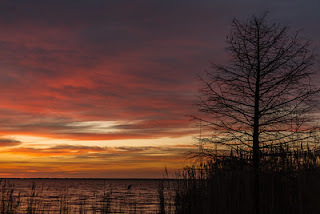 What is a staunchly conservative Dutch Reformed Church doing in the tiny, remote Eastern N.C, community of Pantego?

Well, it turns out that 25 Dutch families settled in Beaufort and Hyde Counties, beginning in the 1910s, displaced by WW1 and finding the marshy area around the Inner Banks to their liking.  What's an activity the Dutch are known for?  Draining wetlands.  After that?  Growing cut flowers.  The Dutch arrived as part of the effort to drain Lake Mattamuskeet.  When the drainage project ended, and Mattamuskeet was restored as a wildlife refuge, some of the Dutch turned to raising cut and bulb flowers, and some continue to this day.

You've no doubt noticed the paths that form on a college campus, or in a park, or other grassy place with a lot of pedestrian traffic -- the paths that weren't laid out by any landscape designer, but are created by the footfalls of actual people finding the best ways to get to where they need to go.

The term for these unplanned user-created trails is desire paths.  It can also refer to deer paths or other non-human highways.  The presenter in the linked TED talk says that the designer's job is to see where the desire paths occur and then to pave them.

Desire Paths would be a good title for something.
Posted by JBJ at 1:22 PM No comments:

Typing the title of this post sent me on a mental tangent: We took my father out for dinner for his birthday last week, my brother and I and our wives.  Dad is a rare specimen, a type that political reporters constantly seek and rarely actually find: a well-informed, judicious, thoughtful political independent: a swing voter.  And Dad despises Donald Trump, which is something our party of five could agree on.  However, as we learned while we chatted over Tex-Mex food, Dad is reading a biography of Jefferson, still a hero of his.  (He may be reading Dumas Malone on Jefferson.  Nobody reads Dumas Malone any more.)  Dad expressed a disdain for Alexander Hamilton, not understanding where the wave of Hamilton-mania comes from.  Something to record about this era in my American life: the shift in view of U.S. history as basically full of racism, injustice, and horror.  This is basically my children's view.  Increasingly it is my view.  For my parents, American history is still a story of heroic (white) leadership, bravery and honor.  I am in the middle here.  The shift is wrenching and it's personal; it's a point of stress in my family.  There is more to write here; maybe another day.

Originally, I wanted to post something today in response to the U.S. Senate folding on impeachment. (Specifically the GOP Senators, and most conspicuously Lamar Alexander, tarnishing his reputation in his last act before retirement.  These people are at their preening pompous worst at moments when they represent the tipping point, the 51st vote.  They love that attention.)  I'm angry and despondent, but trying to come away with a lesson here, more valuable than "our politicians suck."  Yes, GOP pols in this age are craven cowards, but the Trump presidency has revealed the weaknesses and limits of the U.S. Constitution.  Impeachment is poorly designed.  The drafters of the Constitution did not foresee the development of political parties.  And Watergate (which many of us, 10-year old Me included, interpreted as proof that The System Works) was an anomaly, considering that the Democrats had controlled Congress for 40 years at that point, and the U.S. was still in its weird Jim Crow configuration cross-cutting the parties, so that Southern racists tended to be Democrats.  That's the era of bipartisanship that so many in D.C. hearken back to.  Nobody should want to go back to those days.  Full explanation below.

I once met the guy who at the time was pastor of a church in Robbinsville, North Carolina.  Upon moving there, he found the locals to be distinctly standoffish and suspicious.  Eventually someone explained to him that the people who founded the town included several bounty hunters, whose occupation made them aloof and wary, and that fact colored the character of the town many decades later.
Posted by JBJ at 12:01 PM No comments:

Another bookmark.  Sam Wells, writing in The Christian Century about a clergy reflection group he ran, one of whose members divulged that she was gay. (A version is in the January 3 print edition.)
Posted by JBJ at 8:05 PM No comments: