The fam and I had a week's vacation at the Outer Banks of N.C., where we had a most excellent time. We stayed on Hatteras Island, in a house that's within a 20-minute walk of the ocean, and whose property backs onto Pamlico Sound, with a dock that's ideal for swimming, fishing, kayaking, or just chilling with a beverage and some reading material. We've stayed at this house (owned by a friend) three summers running now. I have a soft spot for the Outer Banks, since one of my favorite family vacations from childhood was there, and I took my wife there on our honeymoon. We've managed in three visits to do all the touristy and nostalgic stuff I had on my list: the Lost Colony outdoor drama at Roanoke Island, the Wright Brothers museum, the giant sand dune at Jockeys Ridge, the ferry to Ocracoke, the climb to the top of Cape Hatteras Lighthouse.

The property where we stay is four acres, mostly marsh and maritime forest, boasting a great assortment of wildlife. We came home one day to find a deer in the yard, and we're pretty sure we saw an otter on the banks of the sound. The house and yard are ringed with trees, screening out the road and neighboring houses. There isn't a curtain or blind anywhere in the house, being unnecessary for privacy. At the top of the house is the master bedroom suite, with a vaulted ceiling perhaps 15 feet high. On one wall there is a sliding glass door and a sundeck facing inland toward the marsh and the sound, an excellent birdwatching spot. On another wall, the windows taper and stretch almost to the roofline. These soaring windows face in the direction of the ocean, with Buxton village sitting in the foreground, though neither ocean nor village can be seen due to the trees, only the municipal water tower jutting up. Lying in bed and gazing out the window in the dark, I see the water tower with its red light on top, burning steadily, and then at intervals, the beam from Hatteras Lighthouse sweeps over us. It's a lovely thing to look at before drifting off to sleep.

So the location is a blessing, a real stroke of good fortune. Friends are another blessing: the family whom we invited to share the house with us, whose kids and my kids mutually entertained one another, and who brought and shared good stuff to read: magazines they were catching up with, finds from the used book shop, the Sunday New York Times (a rare treat for me). It was a great vacation for reading. The kids played board games or watched DVDs in the evening, while the grown-ups read, or talked about politics or fiction, about what we were reading.

My random book choice: <a href="http://www.biblio.com/isbn/9780671200299.html">Captain Dreyfus: The Story of a Mass Hysteria</a> by Nicholas Halasz, (c) 1955. I can't be sure but I may have bought it at a used book sale in Louisiana, oh, about 22 years ago, and been lugging it to various apartments and houses ever since.

It's a good read. I was on the lookout for parallels b/t the Dreyfus affair and recent U.S. history, and they're there: a country admired worldwide as a center of Enlightenment values losing its collective mind, exalting national security while ignoring civil rights, fleeing from justice and truth if those violated nationalist myths. But France in that period is fascinating in its own right, with priests, generals, royalists, Bonapartists, and "republicans" of many stripes vying for an upper hand, obsessed with the growing power of the Kaiser, and still working out the implications of the French Revolution which at that time was a mere hundred years old. 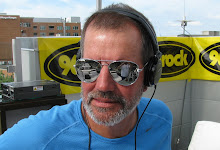 Do you ever have a day at the office like this? For legitimate work-related reasons, I Googled the name of a woman who is a mental health counselor, trying to get her contact information. To my surprise, I learned that she apparently used to be a DJ on an AOR radio station here in Raleigh in the ‘80s and ‘90s.

Which set me off on an online reading tangent. There actually is a Wikipedia entry about WQDR, which I know as a country station but which started life as Raleigh’s first AOR station. It drops the names of various disc jockeys I remember, some of whom can still be heard on local radio, most of whom have moved on to other things. And then I discovered the blog Blade’s World. This is where I have spent half my day.

Bob “The Blade” Robinson inspired me to write this High Hat essay a couple of years ago. A longtime rock DJ in Raleigh, Blade had his station, WRDU, suddenly change formats on him, from classic rock to country. This was a mildly depressing development for me; for the Blade, it was heartbreaking. He was faced with a dilemma. He liked his co-workers, didn’t want to leave Raleigh -– hell, we all need to have a job -- so he tried to keep working under the new country format. He lasted a week. This newspaper account of his abrupt on-air sign-off got me to thinking about the decline of rock music on FM radio, and its effect on me as a music fan. Also the figure of the rock DJ, his passion for music, the intimate bond he could form with listeners, his role in the community. My article ended up being about the rock station I heard as a teenager, but it started about being directly about Bob the Blade.

I wouldn’t even say I’m a fan of Bob the Blade, I just felt like I knew him. I've heard his voice on a pretty regular basis for 20 years now, often just him and me in my car. I admired his quitting due to "artistic differences" back in '06. He's back on the air in Raleigh now, but I don't tune him in every day; I'm more of an NPR guy now. Anyway, his blog sucked me right in. He’s a slacker in many ways, exhibits the taste for parties and girls and odd hours that originally helped attract him to the radio business. But now he’s a middle aged slacker, eying his own mortality, examining his relationships present and past, snarking about the industry he's spent his life in. There’s an intriguing self-awareness and honesty at work in that blog.

Here are the surprising things I learned about the Blade. He has a brother who has a disabling mental illness, whom Bob helps care for. Under the man’s-man exterior, Bob is a decent, patient, caring guy. (Actually, family and pets represent a lot of the blog’s content.) Also, he’s a pretty good writer. I say that a little grudgingly – I enjoyed his blog more deeply than I expected to. Frankly I don't always share Blade’s musical taste, I have to say I figure I’m "smarter" than him (I spent more years in school, certainly), but he’s a better writer than I am. He just has a good way with a story. Also a pretty good way with a camera.
Posted by JBJ at 2:26 PM No comments:
Newer Posts Older Posts Home
Subscribe to: Posts (Atom)